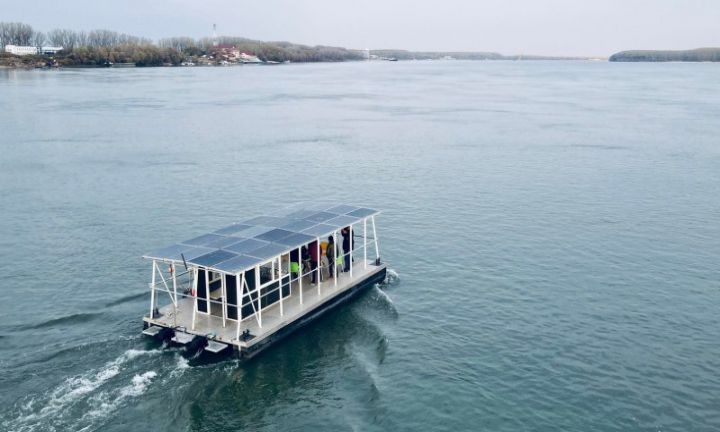 In the period 2019-2021, a research team from the University of Ruse built a demonstration vessel HydRUforce with a hybrid drive based on solar energy-battery-fuel cell for laboratory needs. HydRUforce has zero carbon emissions and was built under the National Research Program "Low Carbon Energy for the Transport and Doemstic Use" (EPLUS), funded by the Ministry of Education and Science and with additional financial resources from the University of Ruse. Scientists from the Bulgarian Academy of Sciences and Technical University of Sofia also took part.

With the construction of HydRUforce, Bulgaria is adding its share to research on the use of low-carbon energy in Europe's inland waterway transport. HydRUforce IS THE FIRST BULGARIAN BUILT-IN DEMONSTRATION VESSEL WITH HYBRID DRIVING AT SOLAR ENERGY BASE-BATTERY-HYDROGEN FUEL CELL. A significant innovation of the vessel is the combination of energy not only from solar panels but also from a hydrogen fuel cell to power the vessel. The vessel was developed under Component 2 of the E Plus program "Electric vehicles and hydrogen mobility". The following people took part in the work on the project: University of Ruse “A. Kanchev "in partnership with the Municipality of Silistra, Bulgarian Academy of Sciences, Technical University of Sofia and the Municipality of Rousse. A pontoon with a solar roof built under the project "Clean Access in the Cross-Border Zone Silistra - Calarasi", funded by a cross-border cooperation program with partners from the Bulgarian side - the Municipality of Silistra and the University of Ruse was used for the hull. All control and propulsion systems of the vessel and their constructive integration were designed and built under the National Science Program EPLUS. It is envisaged that the demonstration vessel will transport a maximum of 12 people with the crew, at a speed of 5-7 km/h upstream and respectively 12-14 km/h downstream. The vessel has a rectangular shape with the following technical data: length 10.5 m; width 4.5 m; height 2.5 m; weight 3.5 t. The propulsion of the vessel is provided by two electric motors with a maximum power of 10 kW and a nominal voltage of 48V. Each electric motor is connected to a group of 400 Ah batteries with a voltage of 48V. In addition, two hydrogen fuel cells with a nominal power of 3 kW are connected to extend the buoyancy range; rated voltage 48 V; rated current 60 A; efficiency ≥ 50%; Hydrogen operating pressure ≤ 0.06 MPa and consumption of 36 l / min. Hydrogen for fuel cells is provided by special 10 liter cylinders with a mass of 15.2 kg, capacity 1.8 m3, and a mass of hydrogen only 0.150 kg, at a pressure of 20 MPa. One bottle can run the fuel cell for 50 minutes. Solar panels with a total power of 7 kW are installed on the roof of the vessel, with which to use the sun's energy to recharge the batteries. The first demonstration voyage of the ecological vessel "HydRUforce" took place on November 25, 2021 at 11:00 am in the waters of the Danube River near the town of Silistra. The event was attended by the Mayor of Silistra Dr. Julian Naydenov, the Regional Governor of Silistra Eli Todorova and the Deputy regional governor Mincho Yordanov, deputy the mayor of Rousse municipality Dimitar Nedev, representatives of the Maritime Administration Executive Agency, teachers, students and citizens.

Prof. Velizara Pencheva presented the team and its work on the establishment of the vessel in the period from the end of 2018 to November 2021, noting that the work is not completed. In 2022, work is underway to legalize the vessel, as well as testing in real operating conditions (data collection, analysis and data transmission); testing of constructive integration; evaluation of the efficiency of energy management; estimation of energy costs at different loads; assessment of noise, range, emissions, reliability; developing a concept for training and demonstrations in a real hydrogen facility; ensuring publicity of the obtained scientific results.

Teams from three institutions worked on the project: the University of Ruse, the Institute of Electrochemistry and Energy Systems of the Bulgarian Academy of Sciences and the Technical University of Sofia. The world is moving forward in terms of the need for decarbonisation, and the importance of hydrogen is growing almost every day. Bulgaria needs to work to develop and gain expertise in this area.

The work of the team was highly appreciated by the representatives of the state and local authorities. In their greetings, they expressed their satisfaction with the fact that the vessel was developed in the town of Silistra, as well as that the team includes doctoral students and students from the town.

Prof. Daskalov, who is also part of the team, greeted all present on behalf of the academic leadership and presented diplomas to the team, signed by the Rector of the University Academician Hristo Beloev.

Assoc. Prof. Assenov presented the main systems of the vessel and together with the other members of the team - Assoc. Prof. Ivan Beloev, Assoc. Prof. Dimitar Grozev and Assoc. Prof. Tsvetelina Georgieva - answered questions. They were actively supported by the doctoral students Eng. Valeri Georgiev and Eng. Stoyan Nyagolov.

The event was attended by foreign professors who are at the University of Ruse under the Erasmus program. Throughout the day, the team and foreign teachers were special guests of the Mayor of Silistra. A congratulatory address was also received from the Executive Director of the Association of Danube Municipalities "Danube", which states that as an organization of 34 local authorities from the Danube region in Bulgaria, the association is located in the center of the ecosystem for decarbonization of the Danube region. "We hope that together with the University of Ruse and other stakeholders we will be able to achieve an ambitious vision, turning the region into an example of achieving Europe's climate goals."